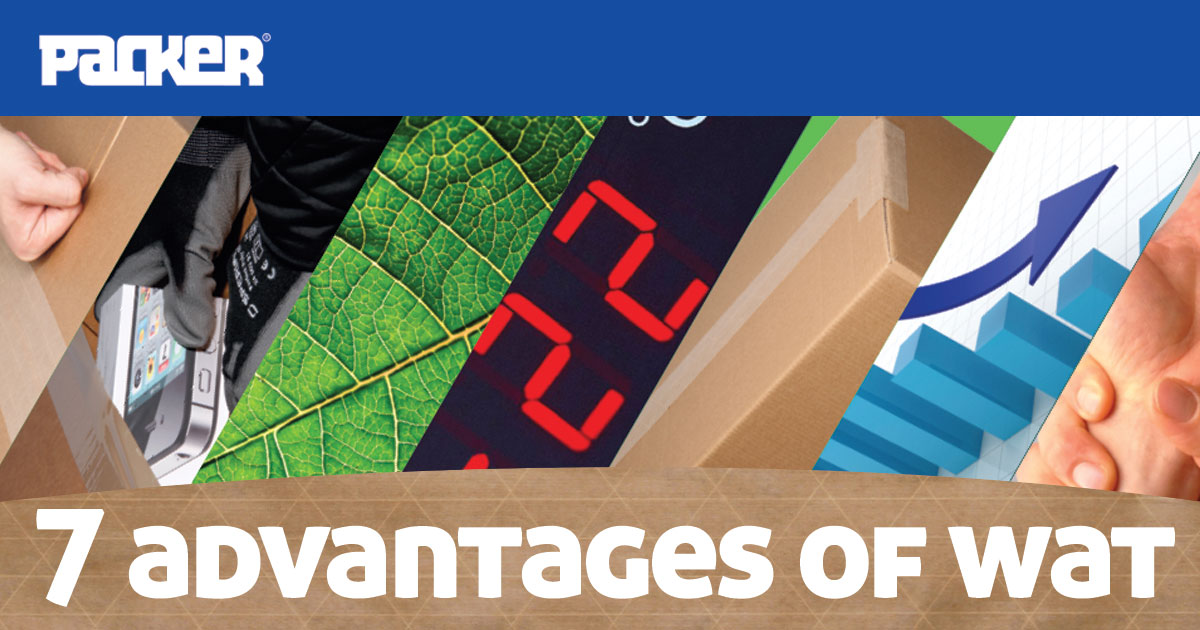 Water activated tape, also referred to as gummed paper tape, is becoming an increasing popular product and helps a business show a united messaged of sustainability without compromising on reliability.

See the 7 advantages of water activated tape (WAT) below and discover the difference it could make to your business today:

Unlike standard tape, water activated adhesive becomes semi-liquid when moistened and soaks into the carton’s fibres. As the adhesive dries and cures it becomes an integral part of the cardboard.

The permanently-taped seams add to overall carton strength and rigidity, so they are less likely to collapse when stacked.

As explored in the previous advantage the adhesive on WAT forms an integral bond to the carton. To remove this tape by hand would leave an evident mark on the packaging and if someone attempted to soak the tape, and break the seal, the amount of water needed would destroy the carton.

Kraft paper tape made from fully sustainable, managed softwood and a natural starch adhesive. It is entirely biodegradable and can be left on cartons sent for recycling, as the kraft paper is compatible with the cardboard for creating new, recycled materials and the adhesive simply dissolves in the water used in the process, leaving behind no residue that will damage equipment or threaten the environment.

In addition the reinforced tape contains 4% nylon strand which is classified as sustainable and CSR accredited.

The plastics on standard tapes become brittle if exposed to the low temperatures and they soften as temperatures raise. Only solvent based tapes perform well at low temperatures, however, this is the least environmentally friendly tape.

In contrast, the kraft paper and starch adhesive used for water activated tapes remain stable at a wide scale of temperatures. They maintain the strength of the seal and the carton’s overall rigidity so that goods arrive at their destination secure and well-presented.

Water activated tape is made from natural kraft paper which is thicker and more dimensionally stable than plastic. It is less prone to distortion and adheres instantly and permanently to cardboard, requiring only one strip of tape per seam.

Water activated tape blends well with natural brown or white corrugated cartons. Furthermore, it sends a clear signal to consumers that you are an environmentally responsible company.

A recent case study showed that a company could save up to 20% on annual cost saving by switching to WAT compared to the standard packaging tape. You can also reduce the amount of tape used by up to 240% compared to standard tapes.

So even without the other benefits that water activated tape brings, a reduction in packaging costs should be a compelling reason for companies to replace plastic with paper.

Using manual hand-held tape dispensers continuously in a short space of time can cause short term operator fatigue and increases the risk of repetitive strain injury (RSI) for the user. A case study showed that you can save almost 60% of the time by applying WAT as opposed to standard tape.